Messages of the previous Chief Prosecutors

Citizens of Bosnia and Herzegovina,

First of all I wish to thank the High Judicial and Prosecutorial Council for entrusting me with the appointment to Chief Prosecutor of the BiH Prosecutor's Office.

Bosnia and Herzegovina Prosecutor's Office priorities in the upcoming period are increasing the number of indictments, intensified and efficient work and prosecution of gravest criminal offenders. Our priorities include improvement of cooperation among law enforcement agencies, as well as creating the required conditions for an efficient performance of the Prosecutor's Office.

Our priorities in the upcoming period will be as follows:

When speaking of the Special Department for War Crimes, the priorities in terms of war crime cases will include increase in the number of issued indictments as well as speedier and more efficient processing of war crime cases and an active role in the implementation of the National War Crimes Strategy.
We will evaluate the capacity and possibilities for efficient performance within the Prosecutor's Office thus ensuring an increase in the number of processed cases per year.
Here in the Prosecutor's Office we’ve invested a lot of efforts to issue more than 100 indictments in the past 3 years in cases that required long and extensive investigations.
We are proud of the fact that with the beginning of our work on war crime cases indictments were issued in cases where victims were waiting for justice for more than 15 years.
Our work is focused on ensuring sentences that the perpetrators deserve and assuring that the victims do not feel forgotten.
I would like to use this opportunity to state that we shall prosecute war crime perpetrators wherever they are, in hiding or not and that we shall not give up in our efforts.

In terms of organized crime, the BiH Prosecutor's Office priority is to work on the so called big cases i.e. tax evasions and money laundering in the amounts of several millions.
The activities on cases of human trafficking and illegal immigration will continue as this is our obligation in terms of European integration.
Also expected is the finalization of the case related to misuse of personal identification documents within the CIPS project, which represents a huge success of the police and judiciary in the discovery of extremely grave criminal offences referring to protection of personal data and personal identification documents.
The Department for Organized Crime is working intensively on several cases which aim to uncover and prosecute members of criminal groups and crime syndicates which have, according to information obtained by the police and judiciary, been active for a while and throughout Bosnia and Herzegovina.
The Prosecutor's Office will also focus on detection and prosecution of sophisticated and modern types of crime related to computer fraud, misuse of electronic and banking systems, as well as criminal offences which have recently appeared in our area where criminals misuse high technology products e.g. internet communication, GPS navigation devices etc.
Bosnia and Herzegovina is, according to estimates of criminalists, in the area of the so called “Balkan route“ through which narcotics, weapons, illegal immigrants and various other goods are being trafficked towards the western Europe. This is why joint efforts of the Prosecutor's Offices as well as other police and security agencies are required in discovery and prosecution of criminal offenders that are often a part of an international crime syndicate operating in the area of several countries.

In light of a global threat of terrorist activities, this Prosecutor's Office has initiated activities that will lead to speedier and more efficient detection of possible dangers of terrorism, detection of terrorism financiers and persons and organizations linked with terrorist activities.
BiH Prosecutor's Office keeps track, continuously, of all activities in terms of security in BiH, Former Yugoslavia and the world, and will try to detect and severely sanction any potential danger of terrorist attacks.
We will continue to fight against all forms of crime defined by democratic standards and the requirements for EU accession e.g. protection of copyrights, regulations on industrial ownership, Law on Gender Equity which are also under jurisdiction of the BiH prosecutor's Office.
We shall continue to fight all forms of crime that endanger economic and monetary system of Bosnia and Herzegovina. We will combat counterfeiting, tax and customs evasions and various forms of smuggling.
I would also like to point out that in its performance the Prosecutor's Office complies with professional and legal standards and will remain, as it has been so far, immune to any attempt of political influencing or pressure. The Prosecutor's Office will, as always, work solely in accordance with the evidence and the law.
The Prosecutor’s Office will continue its efforts on improving regional and international cooperation of prosecutor's offices and law enforcement agencies. It will continue to advocate for a better, more efficient cooperation of the judiciary in the region, and the resolution of all ongoing legal issues and dilemmas.
We will also undertake all required activities focused on getting the judicial institutions of Bosnia and Herzegovina closer to EU institutions, as well as associations such as EUROPOL and EUROJUST, aiming to improve cooperation and Bosnia and Herzegovina’s chances of Euro-Atlantic integration.
I would also like to inform the citizens of Bosnia and Herzegovina that with the joint efforts of BiH Prosecutor's Office and other law enforcement agencies we will try to make Bosnia and Herzegovina a safer living environment for all its citizens, especially for the generations to come. 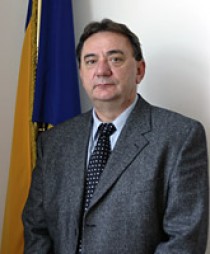