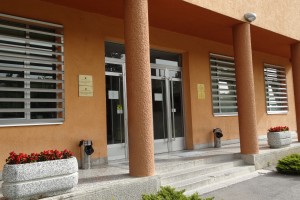 This accused person is charged with smuggling of eight (8) citizens of Syria, some of whom were minors. Prosecutor of the Special Department for Organized Crime, Economic Crime and Corruption of the Prosecutor’s Office of Bosnia and Herzegovina has issued an Indictment against the following person: 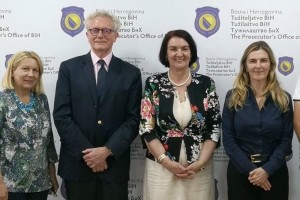 Chief Prosecutor Gordana Tadić, who is a member of the Steering Committee of the EU4JUSTICE Project "Support to the Fight against Organized Crime and Corruption in BiH", met with the officials of the EU4JUSTICE project which is implemented in Bosnia and Herzegovina by the implementation body of the French Ministry of Justice in charge of international judicial cooperation - GIP Justice Coopération Internationale (JCI), with the financial support of the European Union. For the purpose of solving the problem of restoring the devastated location Smiljevići, an Agreement on the Implementation of Joint Procurement of Works for the Restoration of the Devastated Location of the Regional Waste Management Centre Smiljevići was signed in the premises of the Prosecutor’s Office of BiH. Following the DNA analysis in the forthcoming period, it is expected that the identity of the persons whose remains are found will be established. 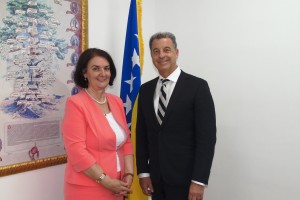 INDICTMENT ISSUED AGAINST THREE PERSONS FOR ASSOCIATING TO PERPETRATE CRIMINAL OFFENCES AND ROBBERY IN AUSTRIA, WHICH RESULTED IN DEATH OF OWNER OF ROBBED HOUSE PRESS RELEASE OF THE PROSECUTOR’S OFFICE OF BiH Due to the fact that a video, which was published on one internet portal on 21 May 2019 and then taken over by other portals and media, caused great public interest, the Prosecutor’s Office of BiH undertook a number of investigative activities in order to determine all the circumstances of the events and the persons listed in the media reports. The analysis of the current situation in the fight against terrorism, as well as the prosecution of returnees from foreign battlefields, were the central topics of the meeting. These three suspects are citizens of Turkey, Iraq and the Federal Republic of Germany, respectively, who are under investigation as they are suspected to have been smuggling, for a longer period of time, migrants from the Middle East across the territory of Bosnia and Herzegovina and towards the border with the Republic of Croatia.
«12...6789101112...188189»