EXCAVATIONS WITHIN THE EXHUMATION PROCESS CARRIED OUT AT THE LOCATIONS OF TOMAŠICA AND BUĆA POTOK. ONE MICRO-LOCATION SITUATED NEAR THE MAIN MASS GRAVE SITE IS BEING PROBED AT TOMAŠICA 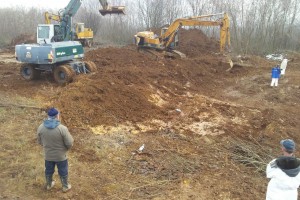 Despite unfavorable weather conditions the efforts on the exhumation sites Tomašica located in the area of Prijedor and Buća Potok located in the Sarajevo municipality of Novi Grad continued without delays.

11.12.2013. 13:31 Acting on the orders of the Prosecutor of Department III of the Prosecutor's Office of BiH and the Court of BiH the authorized officers of SIPA are, in cooperation with members of the Indirect Taxation Authority and with the assistance of the USC Ministry of Interior, carrying out searches of premises in the area of Bihać and Bosanski Petrovac.

11.12.2013. 13:26 The Prosecutor's Office of BiH issued an indictment against Suleiman Avdić aka "Suljo", charging him with the criminal offense of Tax Evasion or Fraud under Article 210 of the Criminal Code of Bosnia and Herzegovina.

ONE MORE PERSON SUSPECTED OF ORGANIZED CRIME AND TAX EVASION DEPRIVED OF LIBERTY. REMAND IN CUSTODY REQUESTED FOR THE SUSPECT

11.12.2013. 13:21 Within the Kekerović et al. Case the authorized officials of the State Investigation and Protection Agency - SIPA arrested yet another suspect. Following the questioning the Assigned Prosecutor of the Prosecutor's Office of BiH filed a motion to the Court of BiH for remand in custody.

11.12.2013. 13:10 Prosecutor of the Special Department for Organized Crime, Economic Crime and Corruption within the Prosecutor's Office of BiH issued an indictment against the following person:
·        B. K. (1962), born in Banja Luka, residing in Laktaši municipality, citizen of BiH and the Republic of Serbia.

THE PROSECUTOR'S OFFICE OF BIH FILED AN APPEAL IN THE BUDIMIR ET AL. CASE. THE APPEAL ASKS THE COURT OF BIH TO CONFIRM ITS JURISDICTION AND TO HANDLE THE PROCEEDINGS AT THE STATE LEVEL JUDICIAL INSTITUTIONS

10.12.2013. 14:54 The Prosecutor of the Special Department for Organized Crime, Economic Crime and Corruption filed an appeal against the decision of the Court of BIH by which the Court of BiH declined jurisdiction in the Case v. Živko Budimir et al.. The appeal, inter alia, states that the committed criminal offenses listed in the indictment against Živko Budimir et al. have caused great harm to the judicial system and the international reputation of Bosnia and Herzegovina.

10.12.2013. 14:47 An exhumation was carried out in Rogatica municipality under the supervision of the Prosecutor's Office of BiH.

INDICTMENT ISSUED AGAINST GANI KOVAČI (1960) FOR SMUGGLING OF PERSONS

10.12.2013. 14:38 The Prosecutor of the Special Department for Organized Crime, Economic Crime and Corruption of the Prosecutor's Office issued an indictment against Gani Kovači - born on April 10, 1960 in Podujevo in Kosovo, residing in Mostar, BiH citizen, currently in prison in Zenica serving a sentence of imprisonment of eight (8) years rendered by the first-instance verdict of the Court of BiH on April 8, 2010 for the criminal offense of Organized Crime under Article 250 of the CC BiH in conjunction with the criminal offense of Smuggling of Persons under Article 189 of the CC BiH.

BY ORDER OF THE PROSECUTOR'S OFFICE OF BIH TWO PERSONS SUSPECTED OF ORGANIZED CRIME AND TAX EVASION WERE DEPRIVED OF LIBERTY. REMAND IN CUSTODY REQUESTED FOR ONE SUSPECT

09.12.2013. 15:01 Acting on the order of the Prosecutor of the Special Department for Organized Crime, Economic Crime and Corruption SIPA officers arrested two suspects in the area of Banja Luka. 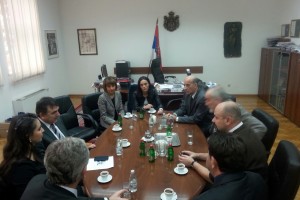