02.10.2013. 15:12 The accused Ezedin Delibašić has entered into the plea agreement admitting guilt for the criminal offense of Tax Evasion, as referred to in Article 210, paragraph 1 of the Criminal Code of Bosnia and Herzegovina.

02.10.2013. 15:10 At the site of Jezernica- Bare in Kladanj Municipality and the sites of Lolići and Kameničko Brdo- Vaselići in Bratunac Municipality, exhumations were carried out under the supervision of the Prosecutor’s Office of BiH.

EXHUMATION ACTIVITIES AT THE TOMAŠICA SITE NEAR PRIJEDOR CONTINUES. MORTAL REMAINS OF SEVERAL TENS OF PERSONS ARE BEING TAKEN OUT OF THE MASS GRAVE

02.10.2013. 15:07 At the site of Tomašica in Prijedor Municipality, intensive activities continue. It is assumed that this primary mass grave contains bodies of victims of Bosniak and Croat ethnicity from Prijedor and its surroundings, killed in the summer of 1992.

INDICTMENT ISSUED AGAINST IVAN PRIMORAC (1964), WHO IS CHARGED WITH TAX EVASION OF 83,000 BAM

30.09.2013. 15:06 Prosecutor of Department III within the Prosecutor's Office of BiH issued an indictment against Ivan PRIMORAC born on January 2, 1964 in Široki Brijeg where he resides, a citizen of BiH and the Republic of Croatia. 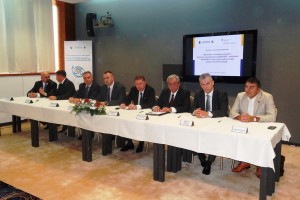 INDICTMENT ISSUED AGAINST DRAGO SAMARDŽIJA (1946) FOR CRIMES AGAINST HUMANITY

27.09.2013. 15:14 The Prosecutor's Office issued an indictment against Drago SAMARDŽIJA, charging him with the criminal offense of crimes against humanity.

27.09.2013. 15:11 Prosecutor of the Special Department for War Crimes within the Prosecutor's Office of BiH issued an indictment against Josip TOLIĆ, born on November 30, 1967 in Odžak where he permanently resides, a citizen of Bosnia and Herzegovina and the Republic of Croatia.

27.09.2013. 15:08 On September 26, 2013 an exhumation process commenced at the location of Lake Perućac – Višegrad municipality under the supervision of the Prosecutor’s Office of BiH.

26.09.2013. 15:31 The accused Jasmin OMEROVIĆ – born on August 13, 1992 in Tuzla where he resides  BiH citizen, charged with the criminal offense of Counterfeiting of Money under Article 205, Paragraph  1 of the CC BiH in conjunction with  Article 29 of the same Code - entered into plea agreement with the Prosecutor of Department III within the Prosecutor’s Office of BiH.

26.09.2013. 15:28 Prosecutor of the Special Department for Organized Crime, Economic Crime and Corruption within the Prosecutor's Office of BiH filed a motion with the Court of BiH to remand the four suspects arrested by authorized officers of the State Investigation and Protection Agency - SIPA in the operation codenamed "Master", in custody.
«12...179180181182183184185...245246»