19.09.2012. 14:10 An exhumation was carried out in Prijedor municipality under the supervision of an investigator of the Prosecutor’s Office of BiH.

17.09.2012. 12:08 Prosecutor of Department III within the Prosecutor's Office of BiH issued an indictment against Mile KRSTIĆ, born on July 10, 1976 in the municipality of Zvornik where he resides, a citizen of Bosnia and Herzegovina. 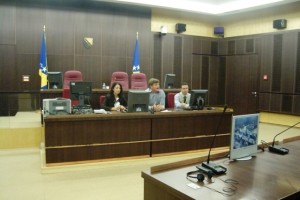 14.09.2012. 15:10 Prosecutor of the Special Department for Organized Crime, Economic Crime and Corruption within the Prosecutor's Office of BiH shall file a motion to the Court of BiH to remand eighteen suspects, who are under investigation for a number of serious crimes committed in Bosnia and Herzegovina in the last few years, into custody.

14.09.2012. 15:05 The Prosecutor's Office of BiH issued an indictment against three persons charging them with Crimes against Humanity under Article 172, Paragraph 1, Subparagraph h) in conjunction with Subparagraphs a), d), e), f), g), i) and k) of the CC BiH.

EXHUMATION WAS CARRIED OUT IN KLJUČ MUNICIPALITY

13.09.2012. 15:04 An exhumation was carried out, under the supervision of the Prosecutor's Office of BiH, at the location of Zgon on the territory of Ključ municipality resulting with the uncovery of the remains of one person. The identity of the victim shall be established through subsequent analysis.

12.09.2012. 15:40 Hundreds of police officers participate in the action, and SIPA is in charge of the activities involving police officers from law enforcement agencies of the respective Entities and Brčko District. This investigation is aimed at shedding light on at least six unresolved murders and attempted murders in Republika Srpska and Federation of Bosnia and Herzegovina, as well as on several bank robberies and money transports in multi-million amounts and a series of serious criminal offenses of organized crime.

12.09.2012. 15:37 An exhumation is being carried out, under the supervision of the Prosecutor's Office of BiH, at the location of Trnovo on the territory of Šekovići municipality. The remains of at least two bodies were unearthed so far. The identity of the victims shall be established through subsequent analysis.

THE PROSECUTOR'S OFFICE OF BIH HAS RECEIVED A SECOND INSTANCE VERDICT IN THE RUSTEMPAŠIĆ RIJAD ET AL.

10.09.2012. 15:17 Having received a final verdict in the case vs. RUSTEMPAŠIĆ Rijad the Prosecutor's Office of BiH highlights that it is satisfied with the final verdict in this case and that it continues to work on prosecuting cases related to crimes of terrorism, along with other law enforcement agencies.

INDICTMENT ISSUED FOR IMPERMISSIBLE USE OF COPYRIGHTS